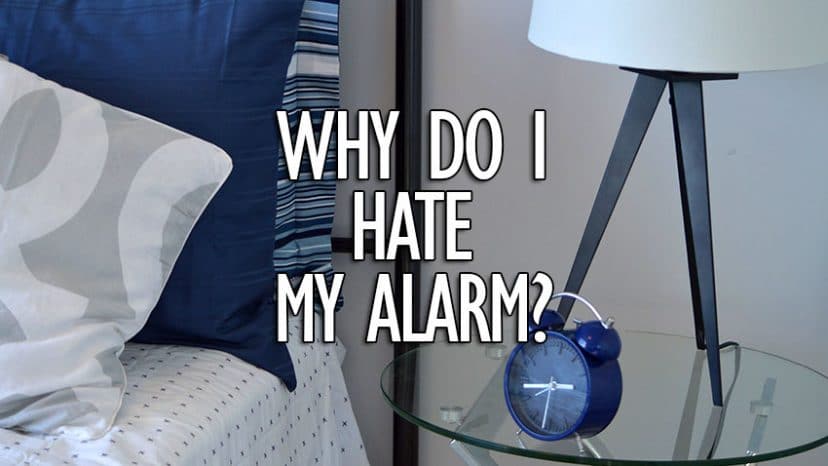 Even the ancient Chinese hated their alarm

Let me tell you a short story:

It’s still dark, just before the dawn. The sun is about to rise from the horizon of ancient China. In a small, wooden house, a small and peaceful looking man sleeps. His name is Wu Ling. Wu Ling loves to sleep. Suddenly, a harsh metallic sound – a crashing, disturbing noise – makes him jump out of bed, his eyes looking red and tired.

It was a candle with embedded nails that stands in a metal tray. When the candle melts down, at some point in time the nails are released, causing them to crash down into the metal tray. Wu ling hates his alarm clock.

It has always been the same. No matter which epoch you look at, people always had their methods to wake up – and they hated it.

Question: Why do I hate my alarm?

Answer: You hate your alarm clock because when it goes off in the morning stress hormones cause your mood to drop. Additionally, the ringing of your alarm clock can cause a fight or flight situation, which increases your adrenaline levels. Long term, this can even result in chronic stress.

But it’s not only that: Alarm clocks can be especially harmful to people with low blood pressure and for people who feel stressed in the morning. Why? We’ll find out later on.

In this article, we’ll also cover some alarm clock alternatives that you can use to wake up peacefully – without a fierce sound that kicks you in your butt every single morning.

Why do I hate my alarm?

When your alarm clock goes off early, there are several things that make you hate it. Let’s talk about some of them.

You hate your alarm because waking up releases stress hormones

In the evening, you fall asleep because melatonin (also known as the sleep hormone) tells your body to. Your brain releases melatonin whenever it gets dark according to your sleep rhythm and sleep habits.

Melatonin often comes in a team with serotonin, which acts as a “steering wheel”. Serotonin alone is the hormone that makes you feel happy and is responsible for a positive mood. But serotonin also regulates your melatonin levels.

Together, they lull you to sleep and leave you in a peaceful state.

During sleep, however, melatonin and serotonin levels decrease and another force grows that prepares you for waking up: Cortisol.

Cortisol is commonly known as the stress hormone. It kicks you out of bed and leaves you in a really bad mood.

Cortisol boosts your heartbeat, your breath, and your awareness. It is necessary to wake up.

Let’s pretend your body doesn’t produce cortisol when you wake up:

You would be in a sleep-like state all day, talking nonsense to your friends. You would not be able to do any physical activities and you would not even be able to think properly.

Cortisol is necessary for you to perform well in the morning (even though you might hate it initially).

A ringing alarm clock is a fight or flight situation

In situations of sudden threat, your body quickly transfers to a fight-or-flight state.

Fight-or-flight reactions are embedded in human behavior. They protect us from dangers.

Back in time, when humans lived in caves, these fight-or-flight reactions saved us from extinction. When a caveman met a saber-tooth tiger, he suddenly freezes from the threat. Within just the blink of an eye, the heartbeat shoots up, the breathing rate increases and the awareness improves.

This is caused by a sudden burst of adrenaline.

These sudden hormone changes and heart-rate increases are always caused in situations where you can only fight or flee. You can’t discuss a diplomatic solution with a saber-tooth tiger.

The sudden banging sound of your alarm clock can trigger such a fight-or-flight response as well.

During sleep, your brain is in a state of rest. When a loud and aggressive noise occurs from one second to the next, you are in fact scared awake. It’s a real stress situation you start your day with.

But what happens if you wake up stressed every single day?

“Some studies have shown that stress has many effects on the human nervous system and can cause structural changes in different parts of the brain. Chronic stress can lead to atrophy of the brain mass and decrease its weight”

Long-term stress caused by alarm clocks can have a significant impact on your brain and health.

Therefore, we have to find a mild way to wake up in the morning.

You use the same alarm sound every day

When I drive in my car and I turn the radio on, I hear the very same songs every single day. And it’s incredibly annoying to me. Then, I always switch to a news channel to avoid the music that’s repeated over and over again.

Maybe you can relate to this.

But why do you keep your alarm sound the same?

If you get annoyed by hearing the same tunes over and over again, why do you even consider using the same alarm sound for months or even years?

Of course, you’ll hate it after a while.

Each morning you waked up stressed (because of the fight-or-flight response). Now, your brain associates this stressed feeling with your alarm sound. You condition yourself to hate it.

By the way:
That’s why you should never make your favorite song your alarm sound. You’ll hate it after a few days.

I wondered why we keep the same sound for such a long time. I’m using the same alarm clock sound on my phone for over 2 years now.

My guess is laziness.

In the morning, your alarm clock will only ring for a few seconds (maybe a minute) before you turn it off. You’ll quickly forget about it and stop caring.

Sometimes, my neighbor seems to have problems hearing his alarm clock in the morning. At about 9 am, I hear his alarm ringing for minutes (the record was over 10 minutes). If you have similar problems, here’s a guide that could help you: What to do if you can’t hear your Alarm Clock?

Why does my heart race when my alarm goes off?

There are two reasons, your heart starts racing every morning when your alarm goes off. We’ve already covered the first one: The fight or flight response of the human body.

It’s a thing that occurs naturally and we humans can’t even do something about it. It’s genetically programmed into each of us.

The second reason your heart starts racing applies to you if you have weak blood circulation.

After lying down for 8 hours of sleep, your blood is poorly distributed and your blood pressure is low. When you suddenly start moving and stay up quickly, your heart starts pounding in order to quickly increase the blood pressure.

Otherwise, you wouldn’t be able to stand properly.

Question: Why does my heart race when my alarm goes off?

Answer: When your alarm goes off, your heart races because the sudden bashing of the alarm clock causes a fight or flight response. Also, if you have bad blood circulation, your heart starts racing at the moment when you try to stand up in order to boost your blood pressure.

In one of their articles, the National Heart, Blood and Lung Institute lists the following causes of low blood pressure:

“For many people, low blood pressure goes unnoticed. Others feel light-headed, confused, tired, or weak. You may have blurry vision, a headache, neck or back pain, nausea, or heart palpitations.”

These causes can be connected to sleep as well.

This explains why you might have heart racing or a headache when you wake up.

Especially sudden movements provoke these symptoms, because of the rapid increase of activity even though your blood pressure has not adapted yet.

How to wake up peacefully?

As you see, your alarm clock can have a significant impact on your well-being. I found it especially alarming (no pun intended) that alarm clocks can even cause chronic stress for some people.

You absolutely want to avoid waking up stressed every morning.

In extreme cases, this could result in:

These effects compound every day you wake up stressed because of your alarm clock.

Now think about that:

You’re probably waking up with an annoying alarm clock since you’re a school kid. How long is that ago? 10, 20,30 or even 40 years?

So many years have you exposed yourself to continuous waking up stressed every morning.

But how can you avoid waking up with an annoying alarm from now on?

The most obvious thing to do is to find a replacement for your current alarm clock. It should be something that does not wake you up with a fierce, stressing sound, but using another way.

Which wake- up triggers are there?

There are different things that can cause you to wake up in the morning aside from sound. Here are the most common ones.

You can wake up by touch, a change in temperature, sound, and brightness

Which one is the best wake-up trigger?

You can wake up with the touch wake-up trigger using a vibration-based smartwatch alarm, but I don’t recommend sleeping with a smartwatch at all.

Similarly, waking up with temperature can be realized by using a blanket that heats up at a certain time in the morning. But that is hard to accomplish and can get quite confusing. We don’t want to overengineer our sleep.

The sound wake-up trigger is the one we want to avoid, so it’s out of question.

In my opinion, there’s only one that makes sense for waking up peacefully.

Alarm Clock Alternatives (you won’t hate): How to wake up without the annoying alarm sound

Making use of brightness as a wake-up trigger is not difficult at all. Actually, it’s pretty simple:

You just need to find a way to wake up with light in the morning.

Why is light a good alarm clock alternative? As soon as your brain senses brightness, it decreases the melatonin levels and wakes you up naturally. This even works with closed eyelids.

This means that light is a useful way to get rid of annoying alarm sounds: You wake up naturally.

And it’s simple to realize:

Use a wake-up light alarm clock.

A wake-up light alarm clock is like a regular alarm clock, but it has a built-in light that can simulate the sunrise.

For sure, this is an alarm clock you won’t hate.

I’m Daniel, a sleep blogger, author, and researcher and I created this page to share the most helpful and unique sleep improvement guides with you.

Personally, I have spent years trying to fix my sleep issues: Not being able to fall asleep and waking up tired.

Now I’m at a point, where I can say I’ve accomplished my goal.

Now, each and every morning, instantly after waking up, I spend my time to write sleep guides for this website.

Hey there! I am Daniel and I was able to improve my sleep a lot in the last few months. I want you to sleep better every single day, so I am writing all these articles about all the tips I know that will definitely help you fall asleep better.