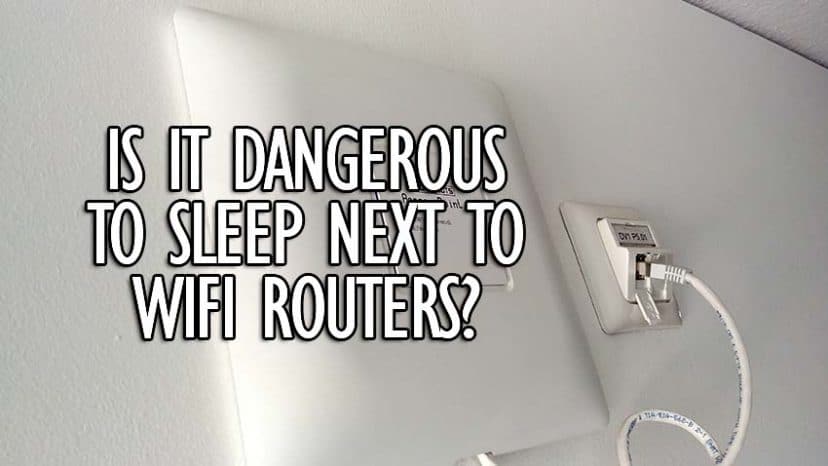 I’m just sitting here, about 5 steps away from the next WIFI router and wonder: Is sleeping next to a WIFI router dangerous? Does radiation affect my health? Should I shut down the WIFI at night? It’s nerve-racking to think about it when you try to fall asleep.

So I did a little research. Sleeping next to a WIFI router is not dangerous in general. The radiation is too weak to have a significant impact on your brain. However, long term effects can not be underestimated. Currently, the long term effects are mostly unknown and have to be guessed. However, there are medical radiation devices that do have well-known effects on your brain. Based on them we can estimate the effects of WIFI router radiation on your sleep, health, and wellbeing.

After reading this article, you’ll be well trained to decide whether you should sleep next to a WIFI router and how to handle the issue. Here’s what we’re going to cover in this article.

First we’re going to cover what radiation can do to you, whether it’s dangerous to sleep next to a WIFI router, and later on, what you can do to avoid being exposed to radiation. So let’s go:

How does radiation affect you?

A lot of people, when they hear the word radiation, think of nuclear bombs and what they can do to us humans: Destroy genes, cause cancer and mutation and long term diseases. Understandably they panic.

Is it the same radiation as the radiation from electrical devices like WIFI routers?

How does electromagnetic radiation affect you?

In general, electromagnetic radiation can’t do more than to move and impact the direction of charged particles like electrons and protons. Depending on how strong the electromagnetic fields are, it can have a big impact on your body or a small one.

What extreme radiation can do to your body

Extremely strong would be able to induce currents in your body that can cause significant damage to your brain and organs. It would even be able to have an effect on your perception. Very strong electromagnetic fields can change the direction of electrons in your brain so they are not able to reach their destiny.

However, in this example, I’m assuming you’re exposed to radiation that’s so strong it doesn’t even exist on earth. Or it exists, but you won’t have access to it.

But what does happen to us being exposed to normal, everyday radiation at home and at work?

Effects of normal level radiation on your body

Scientists (in this study) say that normal power electromagnetic radiation from your wall-plug, radio, your smartphone and your WIFI router does have tiny effects on your body.

Radiation can wiggle some small particles in your body a little bit. And by wiggling some particles inside your body, a heat-up is possible. This heating, however, is so small that it is not noticeable at all.

The only worry they have is that a smartphone held to your head can cause some damage. As the radiation comes from the small antenna inside your phone, the electromagnetic waves still have significant energy when they pass through your skull. This could be a problem. Sadly (or luckily) there is no scientific evidence showing this yet.

Still, scientists say “It is a good idea to avoid unnecessary radiation exposure whenever possible.” Just because we don’t know the causes yet, doesn’t mean there are none.

Is sleeping next to a WIFI router dangerous?

I’ve asked a professor at university about it. He said the radiation is too weak to have an impact on us. People often become too afraid too soon. And that there’s no generally accepted evidence of effects yet.

Still, I think that because the long term causes are unknown, we should be a little aware.

Often it’s a good decision to pay a little attention to the details in our lives and avoid taking a risk. So, especially if you are not really comfortable with sleeping next to a WIFI router, it’s a reasonable decision to just assume it’s dangerous and turn it off while you sleep. Avoid the unknown side effects.

But here is my answer:

What science says about WIFI radiation levels and sleeping

I am an electrical engineering student so I see everything from the point of view of scientists. Electrical home devices are powered by your wall plug, so there’s a limited amount of energy they can radiate. Here’s my answer:
It is not dangerous to sleep next to a WIFI router. They simply consume and output too little amounts of power to have an effect on us. If they had an effect on us, for example like the strong electromagnetic radiation of medical magnetic field therapy, these effects would be known to us. But because it’s such a little amount of radiation, no harm on your health could be measured yet.

I would just assume it’s safe to sleep next to WIFI routers. On top of that, WIFI routers are around for about 20 years now and still, life expectancy has gone up. If WIFI routers and other home devices had a strong effect on us, we would not be able to progress that much. I know this is an argument that you can discuss a lot, but you get the point.

Still, if you feel uncomfortable, you should avoid sleeping next to a WIFI router. Especially the placebo effect will trick your body into feeling worse even though there’s no actual harm. Therefore, you’ll need some ways to protect yourself against WIFI radiation at night. To feel better and to avoid the unknown causes. Here are some ways that can help you to accomplish a reduction of radiation at night.

What to do to avoid WIFI radiation when sleeping next to a router?

To reduce your worries about WIFI router radiation, the best way is to get rid of the radiation. Let me tell you three ways to reduce your exposure to electromagnetic radiation at night.

The most obvious way you can do it is to simply turn it off at night. You can either press the button that turns just the WIFI off and leaves your telephone on (if your telephone uses the internet). Or, if you don’t find the right button, you can simply pull out the power adapter. If you do this, your telephone might also turn off as well. A downside to this is that you can not use any internet applications on your smartphone anymore. So, if you use something like a special alarm clock app with internet radio, it might stop working.

Move your WIFI to another place if possible

While turning off your WIFI is often the most effective way to reduce radiation, some things stop working at night that you don’t want to stop. Here’s another thing you can do: Move your WIFI router to another place if that’s possible. Especially places behind walls are suitable as walls will decrease radiation levels while still keeping you connected to the internet.

I like this approach. It might be hard to do for routers that can only work in one place in your home because only this one place has fitting wall connectors. But if you get your WIFI from a WIFI repeater that just enhances the signal of another router, moving the repeater to another place is a good idea.

Use aluminum foil to change the direction of radiation

If you have a WIFI router you can’t move somewhere else and that you can’t turn off at night, here’s what you can do: Use aluminum foil to build a little antenna that changes the direction and intensity of the radiation.

These are three effective and easy ways you can use to reduce the radiation whenever you want to. I hope, you can apply at least one of them!

The Outline – Is sleeping next to a WIFI router dangerous?

As you now know, sleeping next to a WIFI router is not dangerous in the first place. There are no direct causes that can be connected to WIFI radiation. However, the long term causes are still not properly known and therefore, you have to decide for yourself: Do you feel better when you turn your WIFI off at night or apply the other ways to reduce radiation at night? Or do you stop caring as long as there are no scientific studies covering the long term effects?

Pick the way that suits you best.

For me, I don’t think that radiation harms anyone’s health because the radiation levels are just too low. After a small talk about this with one of my professors who confirmed my view, I am able to not feel bad sleeping with a WIFI router radiating my brain at night.

The answer is simple: It is not an immediate danger like a wild bear when you’re camping outdoors. But there might be an unknown long term danger.

To find out more about how you can improve your sleep every night, take a look at these Sleep Improvement Guides!

My sunrise wake-up light alarm clock was by far the best investment I ever did! It completely changes the way I feel every single morning.
When you wake up with a sunlight alarm clock, you don’t feel tired anymore, because the light naturally wakes you up! You just have to try it.

I’m Daniel, a sleep blogger, author, and researcher and I created this page to share the most helpful and unique sleep improvement guides with you.

Personally, I have spent years trying to fix my sleep issues: Not being able to fall asleep and waking up tired.

Now I’m at a point, where I can say I’ve accomplished my goal.

Now, each and every morning, instantly after waking up, I spend my time to write sleep guides for this website.

Hey there! I am Daniel and I was able to improve my sleep a lot in the last few months. I want you to sleep better every single day, so I am writing all these articles about all the tips I know that will definitely help you fall asleep better.